Top of the page

Primary brain tumors, including craniopharyngiomas, are a diverse group of diseases that together constitute the most common solid tumors of childhood. Brain tumors are classified according to histology, but tumor location and extent of spread are important factors that affect treatment and prognosis.

Craniopharyngiomas are uncommon pediatric brain tumors. They are believed to be congenital in origin, arising from ectodermal remnants, Rathke cleft, or other embryonal epithelium, and often occur in the suprasellar region with an intrasellar portion. Magnetic resonance imaging (MRI) and computed tomography (CT) imaging are used to diagnose craniopharyngiomas, but histologic confirmation is generally required before treatment.

The PDQ childhood brain tumor treatment summaries are organized primarily according to the World Health Organization classification of nervous system tumors.[2] For a full description of the classification of nervous system tumors and a link to the corresponding treatment summary for each type of brain tumor, refer to the PDQ summary on Childhood Brain and Spinal Cord Tumors Treatment Overview.

Craniopharyngiomas are relatively uncommon, accounting for about 6% of all intracranial tumors in children.[3,4]

No predisposing factors have been identified. 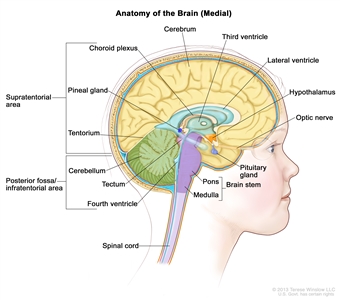 Craniopharyngiomas occur in the region of the pituitary gland, and endocrine function may be affected (refer to Figure 2). Additionally, their closeness to the optic nerves and chiasm may result in vision problems.[5][Level of evidence: 3iiiC] Some patients present with obstructive hydrocephalus caused by tumor growth within the third ventricle. Rarely, tumors may extend into the posterior fossa, and patients may present with headache, diplopia, ataxia, and hearing loss.[6] 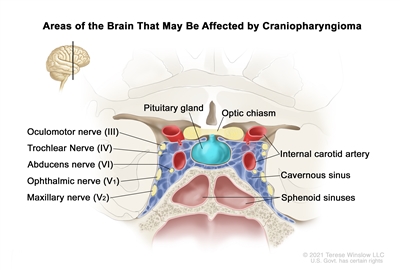 Figure 2. Drawing showing a coronal view of the inside of the brain where craniopharyngiomas may form. The tumor usually occurs in the region of the pituitary gland, near the optic chiasm and optic nerves.

CT scans and MRI scans are often diagnostic for childhood craniopharyngiomas, with most tumors demonstrating intratumoral calcifications and a solid and cystic component. MRI of the spinal axis is not routinely performed.

Craniopharyngiomas without calcification may be confused with other tumor types, including germ cell tumors, hypothalamic/chiasmatic astrocytomas, or Langerhans cell histiocytosis. Biopsy or resection is required to confirm the diagnosis.[7]

Regardless of the treatment modality, the long-term event-free survival rate is approximately 65% in children;[3,4] the 5-year and 10-year overall survival rates exceed 90% in children between the ages of 0 and 14 years.[1,8,9,10]

Craniopharyngiomas are histologically benign and often occur in the suprasellar region, with an intrasellar portion. They may be locally invasive and typically do not metastasize to remote brain locations.

Craniopharyngiomas are classified as one of the following:

There is no generally applied staging system for childhood craniopharyngiomas. For treatment purposes, patients are grouped as having newly diagnosed or recurrent disease.

Dramatic improvements in survival have been achieved for children and adolescents with cancer. Between 1975 and 2010, childhood cancer mortality decreased by more than 50%.[1] Childhood and adolescent cancer survivors require close monitoring because cancer therapy side effects may persist or develop months or years after treatment. (Refer to the PDQ summary on Late Effects of Treatment for Childhood Cancer for specific information about the incidence, type, and monitoring of late effects in childhood and adolescent cancer survivors.)

There is no consensus on the optimal treatment for patients with newly diagnosed craniopharyngioma, in part, because of the lack of prospective randomized trials that compare the different treatment options. Treatment is individualized on the basis of the following factors:

Treatment options for newly diagnosed childhood craniopharyngioma include the following:

Complete Resection With or Without Radiation Therapy

It may be possible to remove all visible tumor and achieve long-term disease control.[1][Level of evidence: 3iA]; [2][Level of evidence: 3iiiB]; [3][Level of evidence: 3iiiC] A 5-year progression-free survival (PFS) rate of about 65% has been reported.[4] Gross-total resection is often technically challenging because the tumor is surrounded by vital structures, including the optic nerves and chiasm, the carotid artery and its branches, the hypothalamus, and the third cranial nerve. These structures may limit the ability to remove the entire tumor.

Complications of complete resection using either approach include the following:

If the surgeon indicates that the tumor was not completely removed or if postoperative imaging reveals residual craniopharyngioma, radiation therapy may be recommended to prevent early progression (refer to the Subtotal Resection With Radiation Therapy section of this summary for more information).[13][Level of evidence: 3iiiDiii]

Periodic surveillance using magnetic resonance imaging is performed for several years after complete resection because of the possibility of tumor recurrence.

The goal of limited surgery is to establish a diagnosis, drain any cysts, and decompress the optic nerves. No attempt is made to remove tumor from the pituitary stalk or hypothalamus in an effort to minimize the late effects associated with complete resection.[14]

Surgical complications with a subtotal resection are less likely than with a complete resection.

Complications of radiation therapy include the following:

Newer radiation technologies such as intensity-modulated photon therapy and proton-beam radiation therapy may reduce the radiation dose to uninvolved parts of the brain and spare normal tissue. When these highly conformal radiation treatments are employed, interim imaging is commonly performed to detect changes in cyst volume, with treatment plans modified as appropriate.[22,26,27] It is unknown whether such technologies reduce late effects from radiation.[16,22,27,28]

Tumor progression remains a concern, and it is usually not possible to repeat a full course of standard fractionated radiation. In selected cases, stereotactic radiation therapy can be delivered as a single large dose of radiation to a small field.[29][Level of evidence: 3iC] Proximity of the craniopharyngioma to vital structures, particularly the optic nerves, limits this to small tumors within the sella.[30][Level of evidence: 3iiiDiii]

Primary Cyst Drainage With or Without Radiation Therapy

For predominantly cystic craniopharyngiomas, stereotactic drainage of the cyst followed by radiation therapy may be a viable alternative treatment to attempted surgical resection. This procedure may also allow the surgeon to use the following two-staged approach:[31]

Intracystic interferon-alpha may also be a treatment option for primary cystic lesions, after ensuring the integrity of the cyst wall, to delay the need for alternative therapies.[32]

Recurrence of craniopharyngioma occurs in approximately 35% of patients.[1]

Treatment options for recurrent childhood craniopharyngioma include the following:

If not previously employed, external-beam radiation therapy is an option, including the consideration of radiosurgery in selected circumstances.[4][Level of evidence: 3iiiDiii]

Although systemic therapy is generally not utilized, a small series has shown that the use of subcutaneous peginterferon alpha-2b to manage cystic recurrences can result in durable responses.[15][Level of evidence: 3iiiDiii] In addition, case reports demonstrating dramatic tumor response to BRAF inhibitors in adults with papillary craniopharyngiomas suggest that there may be a role for BRAF inhibitor therapy in the rare setting of a child with a papillary craniopharyngioma.[16,17]

Quality-of-life issues are important in pediatric patients with craniopharyngiomas and are difficult to generalize because of the various treatment modalities. In one series of 261 patients diagnosed with craniopharyngiomas before 2000, hypothalamic involvement was associated with lower overall survival (OS), impaired quality of life, and severe obesity.[1][Level of evidence: 3iA]

Late effects of treatment for childhood craniopharyngioma include the following:

Refer to the PDQ summary on Late Effects of Treatment for Childhood Cancer for specific information about the incidence, type, and monitoring of late effects in childhood and adolescent cancer survivors.

The PDQ cancer information summaries are reviewed regularly and updated as new information becomes available. This section describes the latest changes made to this summary as of the date above.

This summary is written and maintained by the PDQ Pediatric Treatment Editorial Board, which is editorially independent of NCI. The summary reflects an independent review of the literature and does not represent a policy statement of NCI or NIH. More information about summary policies and the role of the PDQ Editorial Boards in maintaining the PDQ summaries can be found on the About This PDQ Summary and PDQ® - NCI's Comprehensive Cancer Database pages.

About This PDQ Summary

Purpose of This Summary

This PDQ cancer information summary for health professionals provides comprehensive, peer-reviewed, evidence-based information about the treatment of childhood craniopharyngioma. It is intended as a resource to inform and assist clinicians in the care of their patients. It does not provide formal guidelines or recommendations for making health care decisions.

This summary is reviewed regularly and updated as necessary by the PDQ Pediatric Treatment Editorial Board, which is editorially independent of the National Cancer Institute (NCI). The summary reflects an independent review of the literature and does not represent a policy statement of NCI or the National Institutes of Health (NIH).

Board members review recently published articles each month to determine whether an article should:

Changes to the summaries are made through a consensus process in which Board members evaluate the strength of the evidence in the published articles and determine how the article should be included in the summary.

The lead reviewers for Childhood Craniopharyngioma Treatment are:

Permission to Use This Summary

PDQ is a registered trademark. Although the content of PDQ documents can be used freely as text, it cannot be identified as an NCI PDQ cancer information summary unless it is presented in its entirety and is regularly updated. However, an author would be permitted to write a sentence such as "NCI's PDQ cancer information summary about breast cancer prevention states the risks succinctly: [include excerpt from the summary]."

The preferred citation for this PDQ summary is:

Images in this summary are used with permission of the author(s), artist, and/or publisher for use within the PDQ summaries only. Permission to use images outside the context of PDQ information must be obtained from the owner(s) and cannot be granted by the National Cancer Institute. Information about using the illustrations in this summary, along with many other cancer-related images, is available in Visuals Online, a collection of over 2,000 scientific images.

Based on the strength of the available evidence, treatment options may be described as either "standard" or "under clinical evaluation." These classifications should not be used as a basis for insurance reimbursement determinations. More information on insurance coverage is available on Cancer.gov on the Managing Cancer Care page.

More information about contacting us or receiving help with the Cancer.gov website can be found on our Contact Us for Help page. Questions can also be submitted to Cancer.gov through the website's Email Us.

The Health Encyclopedia contains general health information. Not all treatments or services described are covered benefits for Kaiser Permanente members or offered as services by Kaiser Permanente. For a list of covered benefits, please refer to your Evidence of Coverage or Summary Plan Description. For recommended treatments, please consult with your health care provider.

Want to stay signed on?

We are unable to switch you to this area of care

We’re getting your information